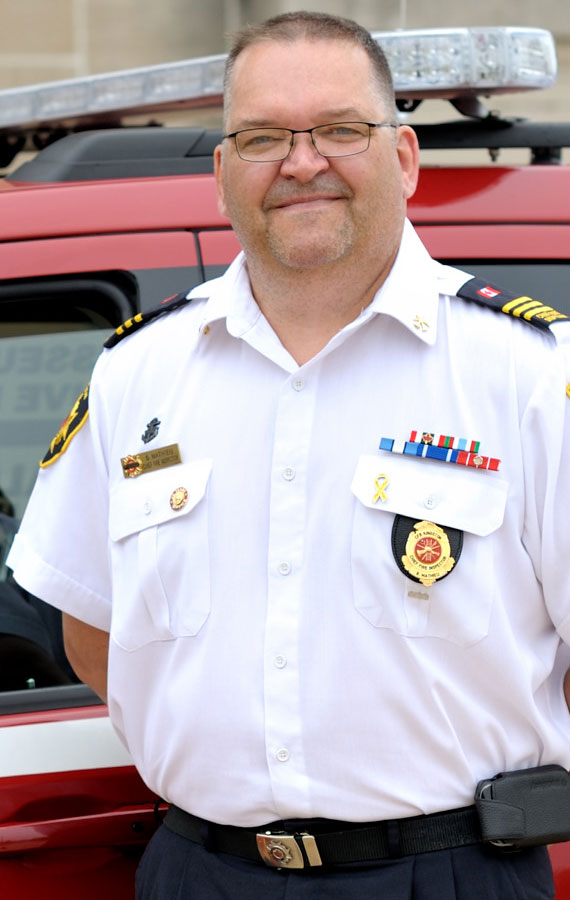 “When I heard about the Veteran’s Transition Network I had big hope, but I was really scared.”

Bruno M. knows how it feels to be in a fire. As a teenager, he was a volunteer firefighter in his hometown of Beauceville, Quebec. His father was deputy fire chief and would often be behind the wheel of the fire truck as the crew responded to calls. The truck contained just two self-contained breathing apparatuses that were to be worn only for human rescue. If no civilian lives were at stake, the firefighters would enter an inferno unprotected and they would pay the price, coughing up soot and blood for days after. They were known as ‘smoke-eaters’ and, to Bruno, it was all part of the job.

There was little help for the helpers. Not even when it was more than smoke they were taking in. Not even when Bruno and his crew responded to a call where a young boy had died of smoke inhalation and was found badly burned in his bed. It was Bruno’s first encounter with death and it wouldn’t fully sink in until the crew was back at the fire hall, eyes that had watered from smoke now filled with real tears.

Bruno’s father was the epitome of work ethic. When he wasn’t driving a fire truck he was fixing vehicles in his own auto mechanic shop, or towing vehicles in the evening for extra money, or serving with the Knight of Columbus.

On one particularly white Christmas, Bruno remembers his father briefly coming inside the house to give Bruno his present—a table hockey set—before heading right back out to work the roads, towing out vehicles that had slid into ditches or were trapped in the snow, helping other families be together on Christmas.

By age 9, Bruno had become his father’s trusted right-hand man, shadowing bits and pieces of his dad’s sometimes 16-hour work days: passing tools, pumping gas, taking it all in. Work ethic was how respect was earned in the Mathieu family and, even at an early age, Bruno believed he would one day earn enough of that respect for his father’s business to become his own.

That summer, at the age of 17, and armed with almost a decade of practical skills passed down from his dad, Bruno joined the reserves. The standard of work ethic felt familiar and Bruno thrived, quickly becoming consumed by training. He was enjoying the work so much that he elected to continue with it rather than return to complete his high school exams. Bruno was on a new path. It was a path that would take him to Germany twice as a reservist, and foster many close military friendships. The loss of one of those friendships was where his reservist road ended.

Bruno was still a ‘smoke-eater’ at heart. So when he and his girlfriend drove past a car wreck on a terrible, rainy day in his hometown, Bruno’s instinct was to stop and help. His girlfriend protested, telling him it was too dangerous, telling him to keep going.

Bruno later learned that his good friend and fellow reservist had died in that wreck, a victim of a drunk driver. “I blamed myself for a long time after that,” Bruno says. He regretted not stopping, but now he wanted to move. “Every time I’d go to the reserves it would remind me of him. I needed a change.”

Bruno joined the Royal Canadian 22nd Regiment and got back to work. His work took him to Cyprus where he continued to take on leadership roles as a young private. He led by the book, which was off-putting to some. When Bruno packed enough water for his section, but the rest of the platoon hadn’t rationed enough, Bruno had to be convinced by a superior to share his supply, reluctant to punish his section for someone else’s oversight.

His strict approach, along with his background as a reservist, made him feel like an ‘outsider.’ After 5-years in the regiment, Bruno was ready to ‘start fresh’ by returning to the duty that started it all—firefighting.

“In the military, we are trained to adapt and react,” Bruce explains. Even if there weren’t fires, there was always work to be done: equipment checks, maintenance, refuelling, static training, aircraft emergency calls, etc. But while Bruno busied himself with managing the fast-paced, ever-changing military workload, a fire of another sort had started its slow burn inside him.

There was no one to talk to. No help for the helpers. And there was also a comparative concern. Working in a non-combat role left Bruno feeling as though he had less of a right to his emotions. “I am a firefighter and there are army guys here. Those guys are tough!”

So he’d go back to work, often on two hours sleep. He was used to it. It was all part of the job.

A battle on a different front

“The military had forgotten how to take care of their people.” It took being diagnosed with cancer for Bruno to realize this firsthand. “I was in the hospital not knowing if I’ll be alive or not tomorrow, and not having anyone come visit me, no one calling me, no nothing.”

Bruno was told he had cancer two days before Christmas. He was told he’d have to remain in the hospital for testing over the holidays. “I’m going home,” Bruno told the doctor, “I don’t know what’s going to happen, but I am going to be home for Christmas.”

What happened was the start of a long battle with cancer and an even longer battle with the military’s response to the disease. (The latter battle continuing to this day through Bruno’s current development of a cancer prevention program for military personnel).

The sickness slowed Bruno down. It detached him from the work that he so loved. It sparked new feelings of anger and reignited old memories of trauma. “It triggered everything,” he says. Eventually, it forced him to retire from the military after 28 years of service.

After a three-year blur of hospital visits and surgeries, Bruno’s cancer became dormant and his condition stabilized. He relocated to Kingston, Ontario with his wife and children to start the next chapter of their lives. But Bruno’s internal fire continued to roar. And the whole family started to feel it. 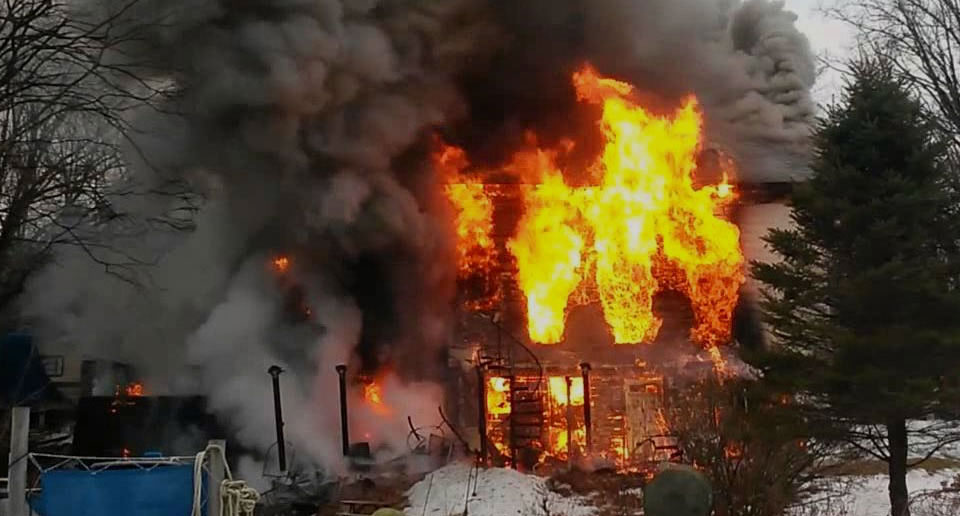 Bruno stormed around the house. He yelled at the family dog. Soon, his two teenage daughters were afraid to speak to him out of fear for his anger. Bruno isolated himself. He did what he knew, what his father had shown him, he worked. But his feelings could no longer be contained and, in isolation, Bruno’s anger turned in on itself. Little work would be accomplished, which only stoked his rage. Bruno was on the brink, his body exhausted and overloaded with despair. He began to contemplate suicide. And, on two occasions, Bruno attempted to overdose on the very pills that were prescribed to help him through the despair.

Thankfully, the pills came back up like the soot after a fire. Bruno survived, he kept moving. He didn’t know it then, but there is help for the helpers. Having already tried individual therapy and neurofeedback training, Bruno was hopeful, yet skeptical when he first heard about the VTN.

“When I heard about the Veteran’s Transition Network I had big hope, but I was really scared,” he says. The hope was tied to that which was familiar—a VTN structure operating under similar rules of engagement to what he was accustomed to, to what he missed so dearly.

The initial fear, though, was tied to that which was new—“You arrive [at the VTN program] and you’re all pumped up, but then the first thing they tell you is ‘slow down’. It’s hard at first.”

When someone has an emotional experience under the attentive eyes and ears of the VTN mental health professionals and para-professionals, they aren’t encouraged to run from it, they are encouraged to be with it. “Adapt and react” takes on a new meaning in the VTN. Bruno listened as others slowly shared their stories.

Hearing from other veterans helped Bruno realize that trauma recovery is not about comparing differences in content—like the intensity of trauma source—but about acknowledging the similarities underneath—the underlying emotions of trauma.

“I thought my trauma wasn’t as serious because it wasn’t combat-related, but I see the other guys doing their work and they’re dealing with the same issues as me! There are no ranks. Everyone is equal, everyone is a student again.”

He calls his VTN experience “extremely helpful” and “surreal,” but makes it clear that, “The VTN didn’t cure me. I still go to therapy. I still do the work. I’m still fragile.”
Witnessing this made Bruno feel safe enough to share his own stories, the very act of putting words to the painful images he’d been holding in his head was, in itself, an act of release.

He calls his VTN experience “extremely helpful” and “surreal,” but makes it clear that, “The VTN didn’t cure me. I still go to therapy. I still do the work. I’m still fragile.”


It is that very fragility that formed the foundation for Bruno’s emotional reconnection with his family. He now speaks about a stronger marriage than he can remember and a closer relationship to his two daughters; “They have their own lives, but I am a part of them now, they know they can talk to me.” Bruno’s daughters have been instilled with the same sentiment he hopes to spread amongst Canada’s veteran population: “If you need help, reach!” 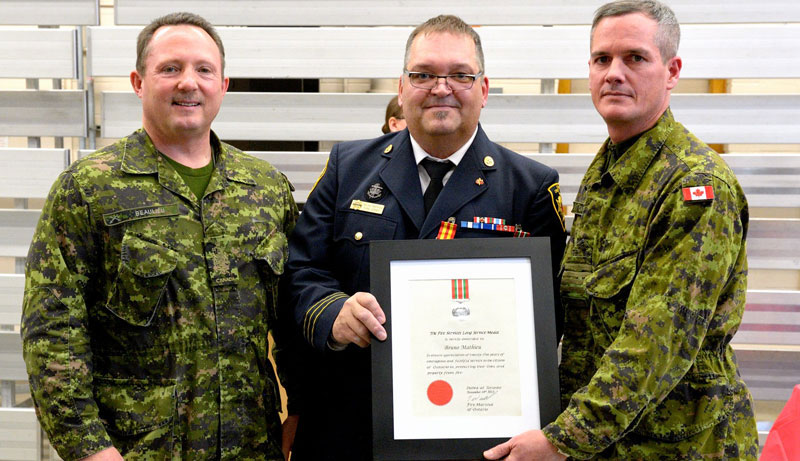 For Bruno, the Veterans Transition Program means…
Relief
For Bruno, the act of putting words to the painful images he’d been holding in his head was an act of release.

Acceptance
Bruno is now accepting of his fragility and asking for help. He hopes that other Canadian Veterans will do the same.

Connection
With the help of the VTN, Bruno was able to form the foundation for emotional reconnection with his family. His marriage and relationship with his daughters is stronger than ever.

You can change lives for people like Bruno
Donate Now