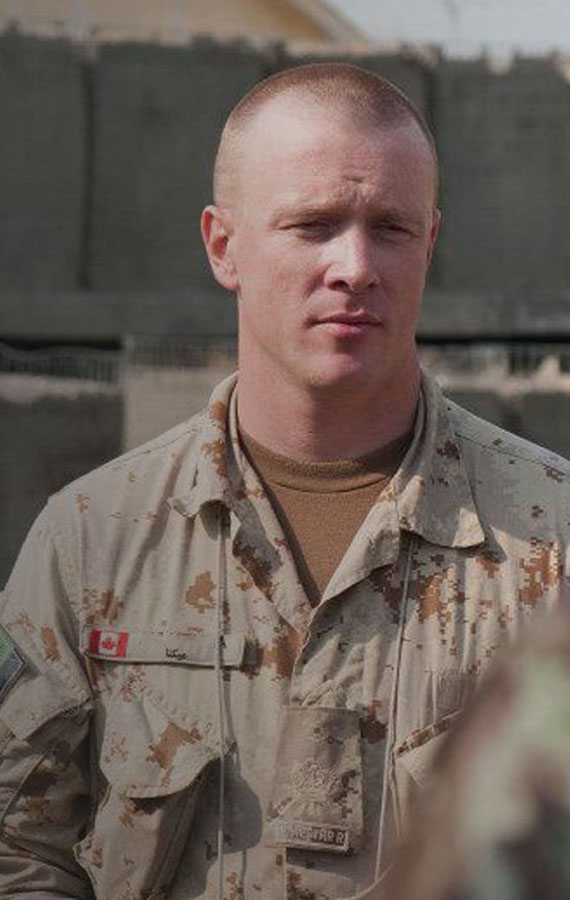 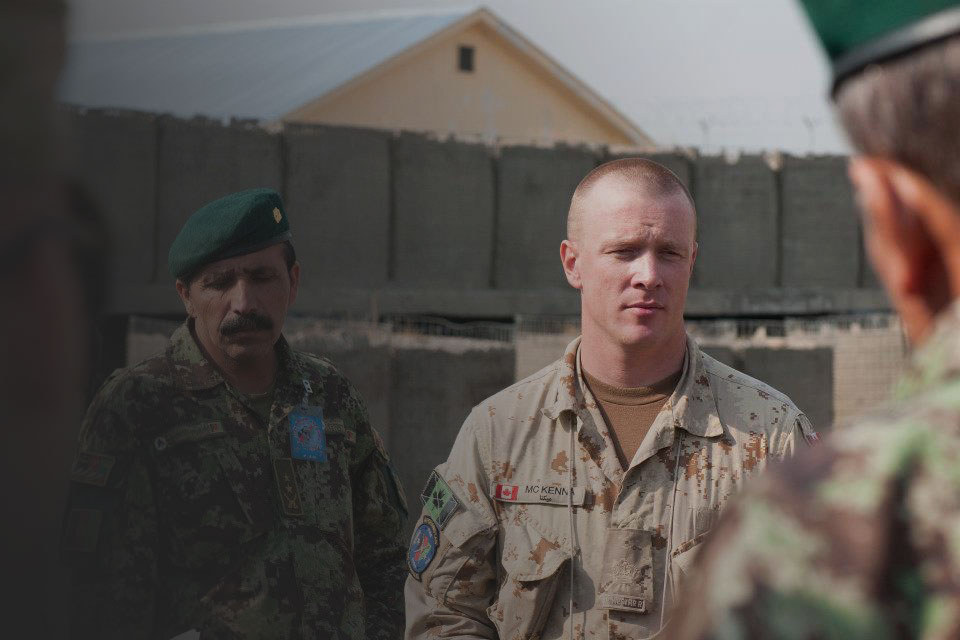 From: BC
Army, PPCLI

Just outside the army base in Kabul were a set of speed bumps. These speed bumps were designed to rattle the car – to slow it down and shake loose anything that might be hidden inside an approaching enemy vehicle.

For Warrant Officer Brian M., these speed bumps were also a “gut check.”

“It‟s that feeling of finality. Of leaving a safe zone and going out into bandit country,” he says.

That’s where Brian’s battle began. Not at the scene of an explosion, but on the road – where each turn could mean the difference between life and death. So he drove fast. Pedal down. Adrenaline pumping.

With each kilometer the speedometer edged higher – 120, 130, 140. He was focused. Each move calculated to avoid threats and to avoid a crash.

Brian gripped the wheel. He checked his mirrors. But what he saw when he looked behind him wasn’t what he was expecting. It wasn’t a suicide bomber or a suspicious vehicle – looking back at him were his two kids.

That’s the moment it hit him – he was not in Afghanistan anymore. 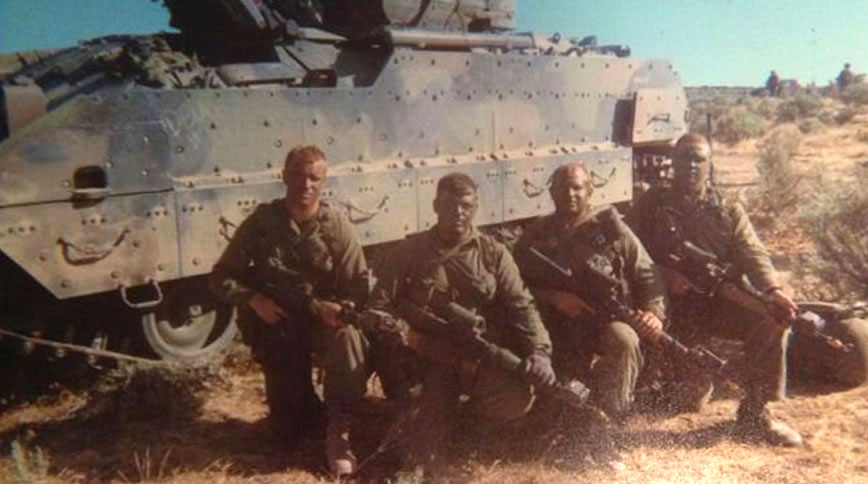 It was early 2012. Brian had returned from Afghanistan in November of 2011. His tour in Kabul was his third deployment since joining the army in 1995. Previously he’d served two tours in Bosnia..

During that first month back Brian didn’t sleep. Instead he’d toss and turn as memories of Afghanistan raced through his mind.

But when he was driving that would all go away.

“When you’re driving and the threat is high you start to get back into that zone. It allows you to not think about everything else and you can just think about not crashing the car. So that’s what I would do.”

And it was working. Or at least it had been.”

The day Brian looked up to see his two kids looking back at him was the same day he realized something wasn’t right.

“Not only am I risking my own life just to block thoughts out, but now I am risking the people that mean the most to me,” he says.

“Just by the way the earth was rolling those days I didn’t crash. Had I crashed you wouldn’t hear about my story. I’d be dead.” 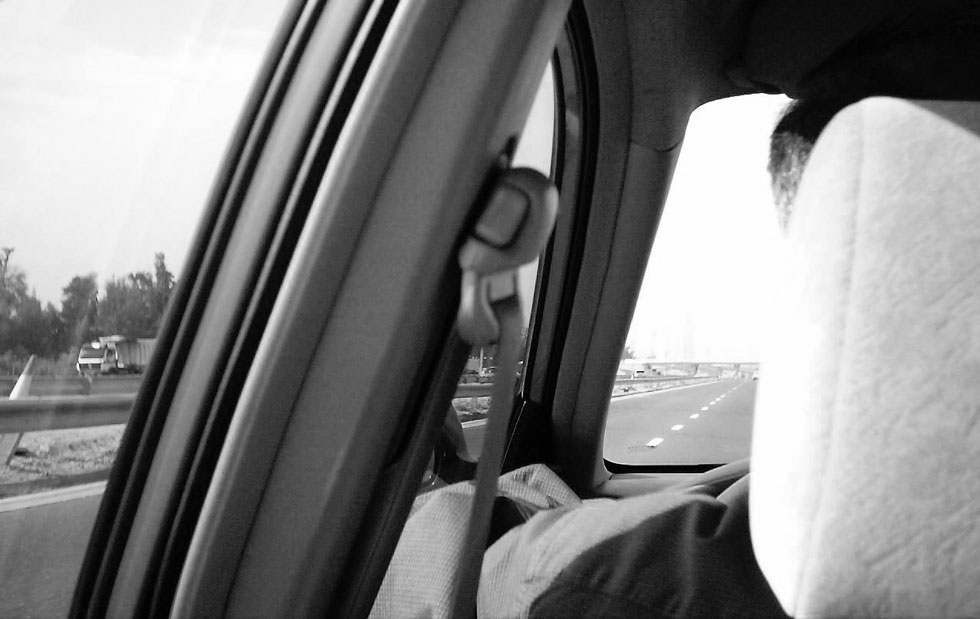 More than 40,000 Canadian military personnel served in Afghanistan since 2001. The number is roughly the same for Bosnia, a conflict that saw Canadian peacekeepers deployed in the early 90s. The troops return to their former lives – but they carry the psychological remnants of war.

According to a 2011 Canadian Forces study, 14 per cent of returning military personnel have been diagnosed with a mental illness. The Anxiety and Depression Association of America, says 67 per cent of people exposed to mass violence will develop post traumatic stress disorder.

If we are to believe these numbers, that leaves a potential gap of 53 per cent of people, including soldiers and veterans, who may be suffering alone and in silence.

The more obvious clinical symptoms of PTSD are broken into three categories: reexperiencing the trauma, emotional numbness, and increased arousal, which means difficulty sleeping, being jumpy, irritated, or angry. These symptoms can breed other problems such as suicidal thoughts and self-medication, whether through drugs or alcohol, which in turn may result in addiction.

According to UBC counselling psychologist Marvin Westwood, who is a co-founder of the Veteran’s Transition Network (VTN), it’s crucial for soldiers to confront their pain and trauma. These men have seen death and destruction. They have experienced grief and loss. And these losses often manifest as physical and mental injuries.

But for Brian, by the time he realized his driving was a symptom of the problem, he’d already come up with a solution. He was going back.

“I knew how I was going to fix it and it wasn’t therapy,” he says.

“And actually it started to calm me down. A lot of the things that I was doing to cope wrongly I stopped doing. I started handling life better. Not because I was getting better, but because I had my way to scratch the itch. I was packing my bags, checking my details and getting ready to go back. Back into my happy zone.”

When Brian returned to Kabul, this time as a civilian counter-IED instructor, things were better. The anxiety and flashbacks started to dissipate.

But it didn’t last. Soon the symptoms he thought he’d left behind found their way to Afghanistan.

He tried to distract himself. He was volunteering for everything and doing anything he could think of to keep busy. But that didn’t work either. Reality set in: someday Brian would have to leave Afghanistan.

“I couldn’t do this forever. I am not going to live on tour,” Brian says. “I started having to get real honest. Eventually I am going home – and then what?” 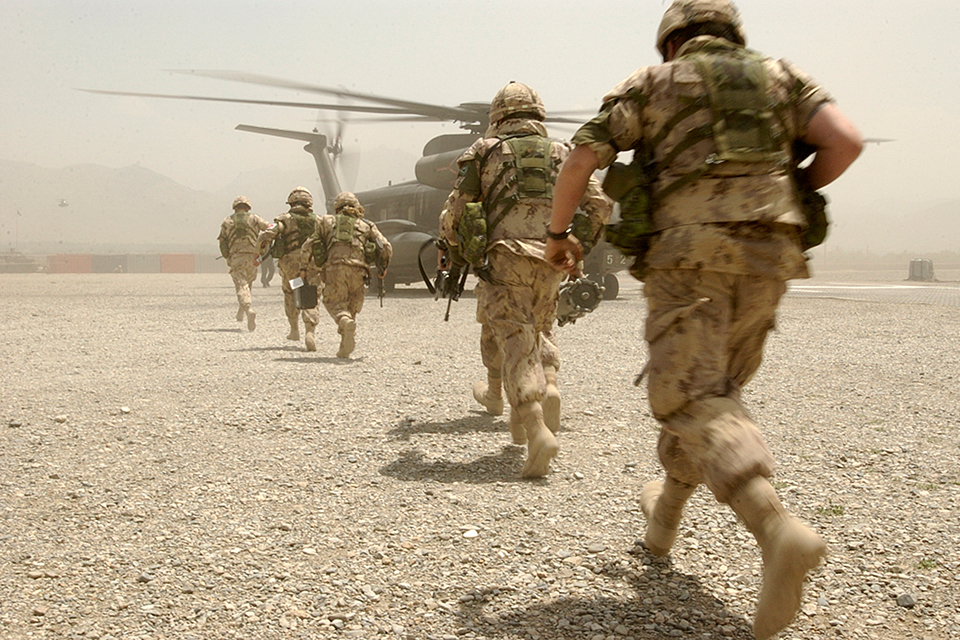 The images that followed Brian were from October 29, 2011.

He says he responded to a scene where a suicide bomber killed 19 – including civilians, military and children.

The Taliban took responsibility. They packed a vehicle with explosives then used it to target an armoured shuttle bus.

The blast left behind a trail of bodies and smouldering wreckage.

“It’s very easy to get distracted with the carnage of the event. And that’s a struggle,” Brian says. “That’s a big struggle in here, inside your chest, because I’m seeing a bit of a guy right by my boot.”

But Brian had to focus. He needed to do his job. Survey the area. Bag evidence. And work quickly and efficiently so they could get out as soon as possible.

“But there’s going to be a part where you just get drawn into what you’re actually handling,” he says. “Whenever there’s a break or two seconds where you’re not actively looking for someone trying to cause you harm, how do you not look at the smeared stuff on your boot?”

When you finally finish, he says, when you get back to base, you need to just find a way to drop it. Just forget about it.

For Brian, that day is like a song stuck on repeat. It keeps playing over and over.

When he came home from that second tour in Afghanistan at the end of 2012 he started to see a therapist.

“He was asking me, ‘What is getting to you about this?’” Brian says. “And I was giving him the wrong answer because I didn’t know how to find the right answer.”

“I was so confused. I did not know the right questions. How the hell am I going to get answers? And my doctor tried his best. But it just wasn’t coming,” he says.

Outside of those sessions Brian didn’t speak much about his experiences.

“I told my wife the tertiary details about these events, but I never really got into it too much. To me she wasn’t going to solve any of my problems,” he says.

“If I tell you something that makes you cry and ruins your day then mine’s not any better. If you can’t solve it why would I share?”

“We just know how to manage scary situations a lot better. I was scared of a lot of things I did overseas. I just did them while I was scared. We find a way to do it even though it sucks.”
‘I was scared’

“We just know how to manage scary situations a lot better. I was scared of a lot of things I did overseas. I just did them while I was scared. We find a way to do it even though it sucks,” he says.

When he came home from Afghanistan the second time, his friends knew everything wasn’t all right. Brian met with a group of veterans every month who eventually convinced him to try the Veterans Transition Network.

It wasn’t the first time he’d heard of the program. But he says it took a year before he was finally convinced to join.

“I went more or less to shut them up. And I had a lot of thoughts the first night there of, ‘Screw this I am going home,” he says.

“It’s scary because I am not used to taking something that bothers me and putting it in the middle of the room and saying, ‘Hey what do you guys think about this?’ I don’t think any of us are.”

During the program each participant shares a loss they had during their time in the military. Then they Then they enact it in the safety of the group to reprocess it.

It was during the enactment with the VTN that Brian was finally able to uncover why his mind kept returning to October 29.

And it wasn’t what he expected.

It wasn’t the body count. It wasn’t the gore. It wasn’t anything he could have changed. What bothered him was that at some point, while taking photos for evidence collection, he’d stepped on a purse.

It was that moment – seeing the contents of a woman’s purse scattered across the ground – that haunted him.

“I mean what’s left of her probably didn’t weigh any more than twenty pounds,” he says. “This was the last thing of hers and I disrespected it.”

Brian says the VTP helped him gain that clarity.

“For me it took one hundred percent trusting the process,” he says. “They know what parts of your story have the gold in them and it’s generally not where you think – at least it wasn’t for me. That was the process for me.”

When it came time for Brian’s enactment, he used the experience to speak to that woman. To apologize to her.

That was the turning point he says.

“I don’t have the ability to smudge October 29, 2011 off the calendar. I can’t say that the day hasn’t happened. It was as nasty as it was. It will probably always bother me,” he says.

It took Brian three years to finally understand why he kept coming back to that day. He says he wouldn’t have been able move forward without help of the VTN – the doctors and other veterans in the program.

“I’ve been through [the program] and I can see what it can do. I think most soldiers are the kinds of guys that look at things and say, ‘If it works, it’s right,’” he says.

“And I am proof that it works.”

‘You want to matter’

This July, after 19 years of service, Brian will be medically released from the army with the diagnoses of PTSD and IBS.

Now the VTN is how Brian connects with and helps soldiers and veterans. As a paraprofessional he returns regularly to the programs, working directly to help veterans who’re in the same position that he once was in.

Brian says because of his own experience with the program he’s empathetic to other soldiers coming through, that that’s why the program is so successful. All it really takes is a nod from another soldier from across the room to know that they understand you. They know what you are going through.

“Before, what I was giving back to soldiers was preparing them to go to places. That’s how I kept them safe.” He acknowledges that though he is losing that, he has come to terms with his new role today. “This is a way to help them as well.”

For Brian, the Veterans Transition Program means…
Clarity
By revisiting past traumatic events, Brian was able to better understand how those moments were affecting him.

Peace
By identifying what was haunting him, Brian was able to work through his trauma.

Meaning
By returning regularly to the program as a paraprofessional, Brian is able to give back to Veterans who are in the same position that he once was in.

You can change lives for people like Brian
Donate Now