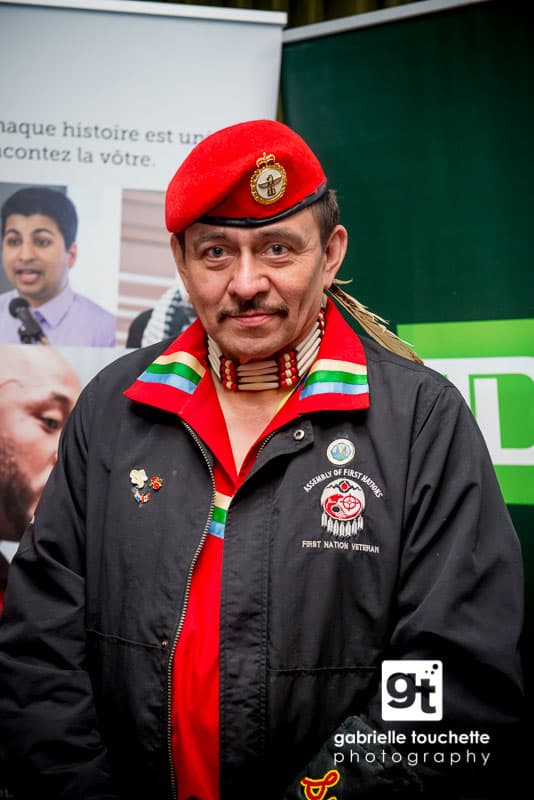 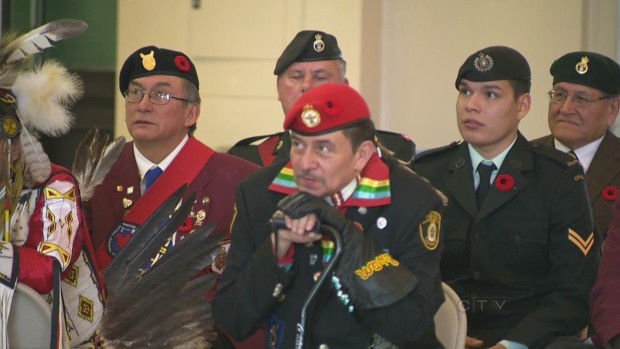 “When I arrived, I immediately found the challenge I was looking for. This was a different band of brothers than any I had ever known.”

6 years ago, I suffered a stroke that put me in the hospital for 3 months. Today, I struggle to remember things, I’m weak on my right side, and I still can’t use a pen and paper. I take 20 pills a day just to manage all of the medical aftermath.

But none of that makes up who I am.

I am a fighter—an Ojibwe Warrior like my father and his father before him. I speak the Ojibwe language; I practice the Ojibwe culture. I dance the Sun Dance, and I carry the pipe. I am nobody’s boy; I belong only to the creator. I carry that truth with me. That spirit carries me now, just as it sustained me from my earliest years in this world. 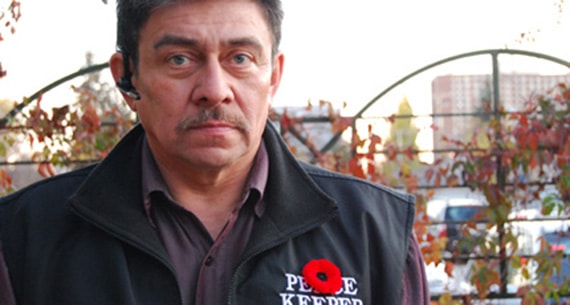 I grew up in Dog Creek—a First Nations reserve just off Lake Manitoba. On the day I was born, I contracted pneumonia. I nearly died that day, but my warrior spirit said, “Not yet.” Childhood was not easy. This was the era of residential schools. Like many of my brothers and sisters, I was sent to the Dauphin school 150 km from my home. I was isolated from my people—cut off and stripped of my cultural heritage one day at a time.


Try as they might, Dauphin couldn’t strip me of my warrior spirit. It was that spirit and a desire for adventure that drove me to join the Canadian Armed Forces at the age of 18. I wanted to get away from the havoc. I wanted to go off to war and be a man in my own measure. I wanted to cut a path no one from my community had ever traveled.


My 12 years in the military didn’t match my romantic dreams. As a member of Princess Patricia’s Canadian Light Infantry and the Military Police, I served on several temporary duty assignments across Canada and abroad (England, Germany, Norway), but nothing dramatic. The highlight of my career was a short stint in London, where the Special Air Service trained and prepared me to guard the NATO Defense Commander. Driving, shooting, tactical movement—I learned it all. I never did get to guard the commander, but I eventually went on to start my own personal protection service after the military.


The Forces showed me a lot—about myself and my fellow soldiers. I wish I could say the experience was positive, but much of it wasn’t. In some places more than others, I discovered that Aboriginal discrimination was alive and well. Behind my back and to my face, I was mocked, ridiculed, and scorned. Of course, they said they were “just joking,” but I knew they weren’t.


At my last duty station, I lost two brothers and my first wife within an extremely short period. I had responsibilities to my tribe and my family—protocols to follow, ceremonies to arrange—but my chain of command didn’t seem to care. Rather than grant me the leave I needed, they accused me of abusing the system. The treatment only got worse from there. Eventually, I was targeted with false charges of sabotage. The case was dismissed, but the damage was done. With 12 years of trauma on my mind and heart, I decided to leave the military and move on with my life.


Standing Up to Discrimination

In my day, Aboriginal members of the armed forces were in a terrible spot. We were treated horribly, but you couldn’t bite the hand that fed you. That’s why, when I finally left the military, I decided to file a formal complaint with the Canadian Human Rights Tribunal. There was nothing left for them to take from me, so I fought back.


For 8 years, I waited for my day in court. When that day came, I was able to recount for the tribunal all that I had been exposed to during my service: the jokes about being a drunk or a stupid Indian, the discrimination, the blatant disregard for my cultural and familial obligations.


For an entire week, I stood and fought the most difficult battle of my life. I brought 7 witnesses with me; the military brought 43. They had a team of JAGs (Judge Advocate Generals) and Justice Lawyers; I was all alone. The lead attorney from the Justice Department had no pity. He wasn’t just there to win his case, but to gut me in public. By the last day, he had me weeping openly on the stand.


During a recess, I found myself undone in the witness stand—my head in my hands with nowhere to go except to the creator for help. When the lawyers came back in, I noticed the lead attorney’s yamaka. For the first time, I saw him for who he was—a man whose people, too, knew the horrors of racism. When he started back in on his cross-examination, I snapped at him from the brink of despair: “Sir, to say there’s no racism in the Canadian Forces today is like saying the holocaust never happened.” The lawyer fell apart. For the first time, he saw me as an individual—just as I had seen him.


Eventually, the tribunal ruled in my favor and ordered the Forces to issue a written apology plus $2,500 for legal fees and emotional damages. It also ordered the Forces to make substantial changes to its harassment policy. To this day, I’m the only First Nations person in this country to have won a human rights case against the military. 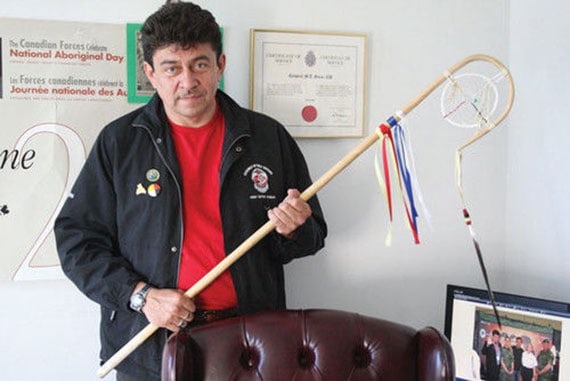 Fighting to Reclaim a Dying Heritage

It may have taken me 8 years to stand before the tribunal, but that doesn’t mean life completely stopped during that time. For the first 4 months after leaving the military, I lived as an idle hermit. I was depressed. The military had blackballed me so that I couldn’t work in law enforcement. When my second wife decided she was tired of seeing me mope around the house, she “encouraged” me to get a job. So, I become a youth mentor. I wanted to help boys recover from the day schools and reconnect with their First Nations heritage. The treaties, languages, and ceremonies didn’t just help them. They helped me more, as I recovered so much of the identity I’d lost in school and the military.


All of that led me to bring Bold Eagle to Manitoba in 1993. The 7-week program, started in Saskatchewan, was like an Aboriginal boot camp for men and women between 16 and 29 years old. It combined basic military training with traditional teaching and elder support to restore young people’s sense of duty. Our youth have lost their warrior spirit. They’ve forgotten who they are and why that matters. They’ve lost touch with their truth. Bold Eagle was a tool to help them rediscover that truth and to take it with them into the military and law enforcement.


Since I left Bold Eagle in 2011, I’ve been involved in many organizations and efforts to help my people reconnect with their heritage. I’ve also worked to strengthen Canada by raising awareness of this nation’s First Nations and Aboriginal people. I’ve served as a board member for Aboriginal Languages of Manitoba, Spiritual Leader for Spirit Wind, Vice President of the First Nations Veterans of Canada, and Lake Manitoba Counsellor.


Our Aboriginal communities are struggling. After my father—Chief Raymond Swan—died in 1993, I’ve noticed a slide in leadership. My father was a strong leader; everyone and everything had to go through him before touching our community. Today, our leaders have lost a sense of their responsibility to the people and the culture. I have the utmost respect for these men, but they often see themselves more as a mayor than a chief. We need better. We need to reconnect with our heritage. Our people are sick; there’s a hopelessness in our communities. The earth is poisoned. We need healing.

Discovering a Faithful Band of Brothers

After my stroke, I was entirely on my own. When the hospital discharged me, I had no assistance from the Western Regional Health Authority (WRHA) or Veterans Affairs Canada (VAC). I had to fight for the entitlements I’d been denied for over 20 years. I was physically weak, nearly paralyzed on my right side, and forgetful. I thought I was near the end, but once again the warrior spirit in me said, “Not yet.”


I fought and clawed and scratched to recover what was lost. In the midst of that fight, I ran across an ad on Facebook for the Veterans Transition Network. I was immediately interested. I’d never done anything like it, and I thought the challenge might help me work through the trauma I experienced in the military.


VTN had a group in Manitoba, but I chose to go to Alberta instead. I wanted to be somewhere fresh where nobody knew me. When I arrived, I immediately found the challenge I was looking for. This was a different band of brothers than any I had ever known. To work through these difficult issues with those new faces was refreshing.


Still, the realities of my physical condition made every moment an intense physical and psychological challenge. The medicine took as much a toll on me as the lingering damage from my stroke. I couldn’t write. If I sat, I couldn’t stand without help. All I wanted to do was sleep; I had to be poked and prodded to stay awake. But, through all of it, those brothers carried me. They supported me the entire way.


I’m a 6’2″ blue-eyed warrior. I’m nobody’s boy, and I’ve never backed down from a fight. To step into that circle and to deal with my psychological baggage was more than humbling. This was nothing like the ceremonies and traditions of my people. This was academic—it made me think in ways I’d not had to think before, to keep things in line. It was hard, but it was good. And what they gave me, I was able to give back in the form of my own knowledge, experience, and cultural teaching. That was the best part. Through my entire life, I’ve believed that, what you give out, you get back twofold.


Spirit and Strength for the Future

I’d like to say VTN made everything better, but here I am 6 years after my stroke. I still struggle. My memory still fails me. I’m still weak on my right side. I still take the pills. I’m alright in the morning, but by the afternoon I can barely think, speak, or stand. It’s hard for me to live like this, to rely on others to care for me.


But what VTN did was teach me how to think about these things and, more than that, to once again take up the challenge of stepping outside myself. To share with and help those other men confirmed me in my lifetime calling as a warrior. It strengthened my spirit to help my First Nations brothers and sisters reclaim their cultural and spiritual heritage, to raise awareness of the struggle they face in the military, and to make Canada a better and stronger nation for everyone.


Life is too short. It’s a blessing. It’s sacred. That’s the message I want to impress on people who’ve given up on life. Don’t hit and run. Don’t back down. Participate in the circle of life and do good for all. That’s what I’m here for. I don’t own my life; it belongs to my people. I’m here to serve wherever the spirit leads me.


For Melvin, the Veterans Transition Program means…
Support
Melvin met a band of brothers that carried him through the program.

A new perspective
For Melvin, the program made him think in ways he’d not had to think before.

Giving back
The best part of the VTP for Melvin was to give back to fellow Veterans in the form of knowledge, experience, and cultural teaching.

You can change lives for people like Melvin
Donate Now